Labour have announced their their candidate in Twickenham will be Katherine Dunne. She works at NPL in Teddington and lives in Hounslow where she’s also a Labour Councillor and Cabinet Member for Housing.  According to the Labour Party website she believes that a “reckless Brexit should be resisted” and will be “campaigning on the issues that matter most to local people”.

Meanwhile after the recent local ‘progressive alliance’ meeting the Green Party has announced that its candidates for Twickenham and Richmond Park will stand aside. The Greens have endorsed Liberal Democrat candidates Vince Cable and Sarah Olney in the two constituencies. The Green Party says it has much that it does agree on with the Lib Dems including holding “similar views on stopping ‘blank cheque’ Brexit, and  Heathrow Expansion”. Tactical stuff eh?

In addition to Tania Mathias (Conservative) and Vince Cable (Liberal Democrat), the Green Party has announced that its candidate for Twickenham will be first-timer Caroline Wren. The local Labour Party office has said that it will have announced its candidate by next week. There is no news yet on whether UKIP intend to field a candidate in Twickenham.

In neighbouring Richmond Park, Zac Goldsmith will be the Conservative Party candidate, returning to the fold after resigning over Heathrow expansion and then getting beaten by Sarah Olney of the Liberal Democrats when standing as an Independent in the subsequent by-election. Andree Frieze will be the Green Party candidate.

Meanwhile all this talk of so-called Progressive Alliances and tactical voting has manifested itself locally in the form of a meeting planned for 3rd May in Richmond. The local Green Party has invited members of “all progressive parties – and of none or the non-aligned” to a meeting to “discuss the options for ensuring centre-left politicians win or retain seats” in five local constituencies including Twickenham and Richmond Park.  Will a spirit of enlightenment and co-operation emerge or will party interests be hard to break down, as in “You’re very welcome to stand aside in favour of our candidate”.   The panelists will come from a range of parties and groups. It’s not yet known if the Judean People’s Front or the People’s Front of Judea will be attending.

In June 2016 Twickenham said “Bremain” but the Nation said “We’d Bretter Brileave It”.  With a clear majority in favour of leaving the EU (a whopping 52% versus a measly 48%) the nation is united like never before. So bloody united in fact that the best way to show that national unity is by having a general election on June 8th. Hurrah! More voting, more punditry, more analysis. It’s clearly a dig at all those people who thought this country already had too many experts and too many polls. 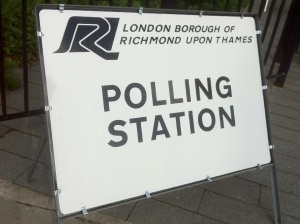 Here in Little Ol’ Twickenham we’ll get to have our say too and send a message straight to the very heart of Westminster, wherever the hell that is.  In the last general election way back in May 2015 longstanding Liberal Democrat incumbent Vince Cable was narrowly defeated after a big swing to the Conservatives and their candidate Tania Mathias. Labour trailed in third with UKIP and the Greens following some way back.  A couple of other blokes stood too.

Although pollsters are suggesting an increased Tory majority in Parliament, Tania Mathias’ own 2,000 vote majority looks quite slender. Just two years into the job and she’ll be defending her seat already. The Liberal Democrats have announced that Vince Cable will again be their candidate which means we are treated to a re-match of the 2015 battle. Will voters turn it into a re-run of the EU referendum? Will tactical voting play a part? Will UKIP bother to field a candidate in Twickenham now the nation’s voted to leave the EU? Will twickerati and gardening get a mention in the pages of Private Eye again? All good questions. Or maybe not.

We’ll bring you the full list of candidates when we know it but we think it’s fair to say they will all oppose Heathrow expansion and will all want ‘the best deal for Britain’ when it comes to negotiating with the EU.

In the meantime, here are the two front runners…